The Adventures of Accordion Guy in the 21st Century

I like grits, but I have no idea if the instant stuff is any good, or even passable. Who’s tried them, and what do you think?

The post Seen at the supermarket appeared first on The Adventures of Accordion Guy in the 21st Century.

For their short film Ten Meter Tower, Maximilien Van Aertryck and Axel Danielson coaxed dozens of people to jump off of a 10-meter diving platform for the first time.

Our objective in making this film was something of a psychology experiment: We sought to capture people facing a difficult situation, to make a portrait of humans in doubt. We’ve all seen actors playing doubt in fiction films, but we have few true images of the feeling in documentaries. To make them, we decided to put people in a situation powerful enough not to need any classic narrative framework. A high dive seemed like the perfect scenario. 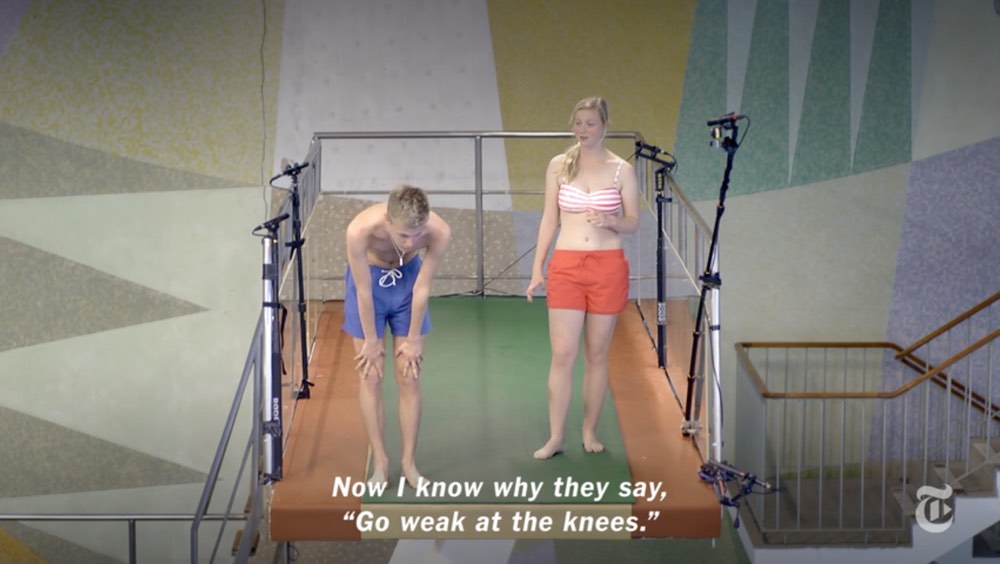 After the first 10 seconds, I was riveted to the screen for the remaining 16 minutes. It’s not at all obvious who will jump easily and who won’t.

People often worry about competition from others, but in the sporting world, the workplace, the home, and school, the struggle against the self — closing the gap between what you want your life to be like and reality, what your head wants and what your heart can provide — is always the most significant and difficult. (via @thisiseamonn)

mattrose
reply
There is a point, somewhere between the 5m tower, and the 10m tower, where your lizard brain looks down and no matter how much your conscious mind tells you it's safe, the lizard brain says: "Fuck no, I will die if I jump off this" The first time I jumped off the 10m platform it took me 5 minutes to work up the courage.
Ottawa, Ontario, Canada

Apple Inc. has hired the former head of BlackBerry Ltd.’s automotive software division as new leadership at the iPhone-maker’s car team places increased emphasis on developing self-driving technology, according to people familiar with the project.

Dan Dodge, the founder and former chief executive officer of QNX, the operating system developer that BlackBerry acquired in 2010, joined Apple earlier this year, the people said. He is part of a team headed by Bob Mansfield, who, since taking over leadership of the cars initiative — dubbed Project Titan — has heralded a shift in strategy, according to a person familiar with the plan.

The initiative is now prioritizing the development of an autonomous driving system, though it’s not abandoning efforts to design its own vehicle. That leaves options open should the company eventually decide to partner with or acquire an established car maker, rather than build a car itself.

Self-driving capabilities have always been part of Apple’s car project. It’s obviously the future. Hiring Dodge seems like a big deal, though. QNX is one of the preeminent real-time operating systems. As Apple creates its own real-time OS, it’s surely helpful to have an executive with industry-leading experience in the field.

(This is Gurman’s first story for Bloomberg after leaving 9to5Mac.)

mattrose
reply
An interesting side note. The rumours are that the new Apple office in Kanata is right next door to the QNX HQ
Ottawa, Ontario, Canada

On the diversity-readiness of STEM environments: “It’s almost as if I could only enter the makerspace as a janitor.” by Mel
Tuesday April 28th, 2015 at 7:51 PM

My thoughts from an online discussion with other female Olin engineers on this NYT article on “how to attract female enginers,”, edited for context. In particular, we brought up the (well-worn) claim that women don’t want to “just focus on the tech stuff” and want to “do sociotechnical/humanitarian work that makes a difference in the world.”

I’ve built my career as a “technical community person” who “thinks beyond the technology,” and as a teacher and researcher of learning environments — so this may come as a surprise to people who know and have worked with me. But if my teenage self had had her way, I would have VASTLY preferred to “just focus on the tech stuff.”

As a kid, I wanted to choose the privilege of being oblivious and keeping my head down and immersing myself into the beauty — the sheer beauty! — and joy of STEM for STEM’s sake. I didn’t become an ECE to work on educational computers or hearing aids or anything like that. As my friend (and former roommate) Kristen Dorsey said, “I just geek out about nerdy stuff, OK?”

But I couldn’t “just geek out about nerdy stuff.” The environments where I was trying to “learn about nerdy stuff” were sociotechnically broken in a way that made it hard for me (as a disabled minority woman, among other things) to join in. If I wanted to even start being part of the technical community, I had to start by fixing the technical community — patching the roof and fixing the plumbing, so to speak — before I could even walk inside and start to live there. And when I patched the leaking roof, I patched the roof for everyone, and other people who needed non-leaky roofs to be in the community could now… be in the community as well!

For instance, I got really, really good at facilitating meetings because it was the only way I had to make meetings accessible to me — when other people facilitated meetings, they’d often forget I need to lipread, so… I just quietly started leading them myself, and ended up making meetings work better for everyone. And I found that when I drifted towards “humanitarian” projects, the people there were much more conscious of sociotechnical things and more likely to have already-healthy environments, so I would have less leaky roofs to patch, and less resistance when I tried to patch the roofs — and people actually recognized and valued roof-patching labor instead of looking down on me for not writing code full-time.

After a while of patching roofs and unclogging toilets and plastering the rotten drywall, I got a reputation in industry for being really, really good at open-source software/hardware (technical) community facilitation. It’s almost as if I could only enter the makerspace as a janitor. And part of me resented that, but never said so. But, I told myself, at least I was in the building. And I saw that my “janitorial” work made it possible for other people to enter the building and do the things they wanted to do — which were often the things I wanted to do, too! — and so I thought: okay. That’s okay. At least somebody gets to do it. I can see my gift to the community doing so much good, that I will give up my desire to learn and do the technical things — so I let my own STEM learning slide. I am good at “community work,” and I did come to genuinely love it, over time.

But if I had the choice, I would have never gone into “community work.” I would have chosen — if I had the choice — to focus on “shiny tech stuff” that… didn’t save the world at all. If my teenage self had had her way, I would not do community-facilitation-anything, I would not be thoughtful about women or minorities or disabilities or any underprivileged group in engineering… I would be oblivious to all my privilege. I’d be a kernel hacker, or an embedded geek, or something “hardcore technical,” Because I could be.

But I didn’t have the wherewithal (or the desire) to shovel all the stuff out of the way that I would have to do in order to do that. If you think of “caring/environmental labor” as a sort of tax some people have to pay in order to get to “learning/doing technical things,” my tax rate has always just been too frickin’ high.

So I have been “the full-time community person who is ridiculously good at tech stuff that she no longer gets to do,” instead of “the technical person who understands and listens to and cares about inclusion and community.” Because I cannot not patch a leaky roof. But I have always wondered what I might have grown up into, if I had learned STEM in an environment that was ready for me — without me having to fix it first.

‘Apparently None of You Guys Realize How Bad of an Idea a Touchscreen Is on a Phone’ by John Gruber
Monday April 6th, 2015 at 9:05 PM

Apparently none of you guys realize how bad of an idea a touch-screen is on a phone. I foresee some pretty obvious and pretty major problems here.

I’ll be keeping my Samsung A707, thanks. It’s smaller, it’s got a protected screen, and it’s got proper buttons. And it’s got all the same features otherwise. (Oh, but it doesn’t run a bloatware OS that was never designed for a phone.)

The Samsung A707 was a real beauty.

mattrose
reply
It just shows how important getting the software for the touchscreen right was. Nobody had ever done a touchscreen well before, so people assumed it couldn't be done...
Ottawa, Ontario, Canada

mattrose
reply
Re #4, I can't count the number of times a developer has said to me: "It builds on my machine", to which I invariably respond, "All right, I'll take your desktop and incorporate it into the build network, IT should be able to replace it your desktop by the end of the week"
Ottawa, Ontario, Canada